The easiest, yet very effective, arpeggiated texture to do is, spelling out the chords played in the harmonic layer in an instrument or instrument group. So let’s say you you have a Cmajor – Fmajor – Gmajor – Cmajor chord progression in whole notes in a string orchestra. I will be using this most simple chord progression for most of the examples. The reason for this is, so we can observe what we can achieve with texture, even if we are dealing with the most common and dull chord progression on planet Earth.

To make this chord progression more interesting inside the whole orchestration, you can have the celli, for example, playing eighth notes, that are spelling out the chord.

*Tip: for the best results for these kind of texture in celli, try to incorporate as much open strings of the cello as possible. This way it will be a lot easier for the players to play the arpeggiated lines. To learn how to write great arpeggiated cello lines, I advise you to study Bach’s cello preludes and suites. Note also, that I am using bigger intervals at the bottom of the arpeggio and smaller intervals on the top. You do not want to muddy your low end with texture!

You can see how this simple texture works as a symbiotic layer to the harmonic layer. The example above thus shows a very simple two-layer orchestration in the strings (harmony + texture).  Although the cellos are playing the exact same notes as the other instruments (just in faster note values), our brain thinks of these notes as a new layer.

To make arpeggiated textures more interesting, I like to add notes that “do not belong” in the chord I am spelling out. This way I can add additional color to the harmonic layer while making the texture layer more interesting at the same time. In the next example I will slide in an extra ninth to each spelled out chord in the celli. These added notes are called “added dissonances”.

You can add ANY note of the mode you are currently in to the notes already in the harmonic layer. Most often the best choices are to add a 9th, 7th, 6th. In different scales/modes different added dissonances also work.  For example, if you are using a Lydian mode an augmented 11th might work great.

We can make our texture in this example even more intricate and interesting with using the violas, for example, to compliment the celli.

Or we can even go beyond that and transform the whole harmonic layer into a texture layer. Note that I am mainly using the notes already found in the harmony of our sketch, so the harmony is still clear, but I am adding in some added dissonances to make the texture a bit more spicy. The harmonic layer is now present inside the texture layer. The only instrument, that is left intact is the double bass, which gives us a solid fundament, that in a way glues the instruments together.

Till now we have only dealt with the string section, but now let’s take the same harmonic structure in the strings from the first example and add an simple arpeggiated texture in a flute.

With the flute texture I used a similar principal as creating the texture in the cellos. I used primarily used the tones already found in the chord I am spelling out, while adding in a few 9ths and 7ths here and there to make the texture more colorful. Note that the flute is one of the most agile instruments in the orchestra. For this reason, I often make flutes play a lot of fast arpeggios. You may notice, that while the cellos in the previous examples are playing 8th notes, I gave the flutes to play 16th notes in the same tempo. Also note, that I marked the flute one dynamic level lower than the strings. The reason for this is, because I want the texture to be in the background of the orchestration. I do not want it to be heard as some sort of melody. Another thing I want to point out is, that I slurred the flute in a way, that the slur changes on the top (highest) note. The reason for this is, that I want a very slight accent on the top note. This type of slurring will also help the flutist play this line. The 16th note pause at the beginning of the measures is there, so the flutist can take short breaths between the lines. Always remember, that woodwinds players have to breathe! Whether you are writing for real players, or inside the DAW… If you want to create realistic woodwind lines inside the DAW, always write a line, that a real woodwind player could actually play, meaning, that you have to incorporate short breathing pauses.

Let’s expand on this example a bit more and let’s add another flute into the mix.

In this example, the 2. flute is playing notes of the same spelled out chord as the 1. flute. It is also playing in the same direction as the first flute, but the notes it is playing are lower, than the notes that the 1. flute is playing. I think we can all agree, that this example is even more colorful, than our last example, where we only had 1 flute at our disposal. But what I most often like to do, when I have 2 flutes, is to make them play the same arpeggio, but in contrary motion. This contrary motion gives an impression of a much denser texture.

In this example, the 2. flute is playing notes of the same spelled out chord as the 1. flute. It is also playing in the same direction as the first flute, but the notes it is playing are lower, than the notes that the 1. flute is playing. I think we can all agree, that this example is even more colorful, than our last example, where we only had 1 flute at our disposal. But what I most often like to do, when I have 2 flutes, is to make them play the same arpeggio, but in contrary motion. This contrary motion gives an impression of a much denser texture.

We can also expand this way of thinking even more and add a fourth note value to the texture in the violas, for example, making them play quarter notes. Note that now the dynamic marking in the violas is piano, since I want them to be part of the texture and not in the foreground.

Also take into consideration, that the first note of every bar of the violas is the same note, that is played in previous examples. This way, the harmonic structure of the down beat stays intact and the listener can easily recognize the chordal structure of each bar.

What I would also like to bring up again at this point is the question about thirds in the chord. Having too much third in a chord is usually not the best option. (Please refer to my chord structure article) Since texture is formed with relatively fast passing notes, you really do not have to worry about having too much thirds in the textures, since all of them are transitional. A rule of thumb would be: The faster the notes in the texture are, the less you have to worry about them causing a problem in your orchestration.

Not only woodwinds and strings can play texture. A great instrument for creating arpeggiated lines is also of course the harp! In the example below, the harp add an extra layer to our already dense texture. This same line could have been easily played by the piano or even vibraphone.

We can obviously expand this texture even more with making the violins have part of the fun as well! In the next example I am going to take advantage of the open strings of the violins as much as possible, to make them play “over the string” arpeggios, that are very common for the violins. The second violins are going to play a mirror image of what the first violins are playing.

As you can see, now all the instruments are playing texture except the double bass which is still part of the harmonic layer. While we have almost no standing harmony in this example, the harmony is still clear, since it is constantly present inside the texture.

If we add 3 horns to the mix, we can now add some depth to the  harmony layer. The dynamic marking for the horns is piano, since I do not want them to stand out too much. I only want them to compliment the harmony and glue the whole orchestration together.

Note also, that I marked horns in the piano dynamic level although they are playing the harmony and not the texture. The reason for this is, that generally brass is louder than strings and woodwind, so I mark the brass one dynamic level lower than them. I want to also point out again, that I am constantly using added dissonances (9ths, 7ths, ect.) in the texture, to make it more colorful.  If I add another horn to the mix, I can also add some sexy added dissonances into the harmonic layer.

You can also additionally color your textures with using a selected mode, that corresponds with the chordal structure you have. I will go more in depth about this topic in my upcoming course.

In our texture examples so far we are dealing only with major chords so in the example below, I am adding an augmented 4th to every chord making all the chords sound as if they were written in an lydian mode. So in the first bar I am getting a C lydian mode, in the second bar a F lydian mode, in the third bar a G lydian mode and in the last bar a C lydian mode again. Of course, this type of writing won’t come in handy all the time, but I just wanted to show you an even more colorful way of creating texture and harmony.

Let’s now transpose our example into a natural minor scale. Textures work in the same way no matter what scale or mode you are using.

For the last example I wrote a short 12 bar composition using the texture we have discussed previously. I added a simple melody to round-up everything. I also added 3 trombones to the orchestration, so they can take the harmony while the horns are playing the melody with the first and second violins. Study the example closely!

I hope you enjoyed this article! There is a lot more in my course: Orchestration Reloaded Writing & Arranging For Strings 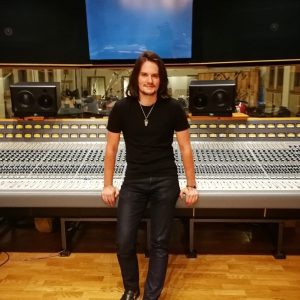