Mastering Storytelling in Your Art

A lot of times, reading posts on digital art communities, I find people asking how they could make their paintings more interesting. Obviously, painting skills are not enough to catch the attention of the viewer. What makes a work catchy, that attracts the eyes, that stimulates our imagination, that surprises, is essentially storytelling.

A concept artist’s job is 50% visual materials and 50% ideas. So telling a story through an image is the purpose. Even when you’re working on a personal work, which could not be a concept for a final product but a single piece being an end in itself, adding storytelling would surely make the difference and increase the quality of your portfolio.

Using storytelling in your paintings is easier than you think. There are indeed several ways to do this effectively.

Both emotional and rational context give a sense of time and space in which the story takes place, and a precise atmosphere to what’s happening in the frozen moment of your painting.

You can create a context with mood, environment and other single elements and details, that have an important role even if they’re not the protagonists of the piece. Choosing the mood is one of the first steps of your work: it can be dramatic, calm, very dynamic, horror… However you want your scene to feel like!

Characters always tell a story. Their pose, movements and facial expression always speak to us, talking about their actions, interactions, their feelings and personalities. As we are talking about characters, their clothes, and every single detail of them that builds the entire design, gives us information about what that character’s job, tastes and role in the story are. Even a static, far away figure, put in the right way, is a part of the whole storytelling.

#3: Choose The Best Arrangement And Point Of View

The point of view and composition surely can change significantly the effectiveness of what you’re telling. Is it better a low angle view? A high one? Or maybe an eye-level view? What are the key elements? Where do I put these other elements?

You will automatically have the answers by thumbnailing! So before going on with your painting, you have to try different alternatives and then choose the one of them that better fits your needs.

To tell a story, you don’t have to know exactly what’s going on in your painting: the most inspiring works are those in which the observer’s brain is stimulated to construct an action, an event, a story with his own imagination.

So what we have to do is to give an input to make the viewer’s imagination start to work.

You can catch the attention of the viewer making him ask  “Why/how is this happening?”, “What does that symbol mean?”, or, as for this piece above, “What’s over that giant mass?”

The first thing we tend to do is to tell about an event representing the exact moment when that event occurred. But you don’t have to necessarily depict the climax as a present moment. You can tell about something happened in another temporal line, different from that of your actual piece, in order to make it more interesting. So you can:

Represent the moment before the climax.

I’m talking about a moment of very high tension, after which something important is going to happen: an archer with the bow stretched to the maximum, ready to shoot his arrow; a dragon with its mouth wide open, with a strong light visible from the inside, a prelude to a violent blaze; an aircraft that rises from the ground, with the propellers loaded, ready to speed into the skies.

In this piece below, the strong storytelling is made by a lot of elements: the clothes of the guy in the background, from which we can speculate he is a sovereign, maybe an anarch, the tubular structure over him, the contrast between the strong light and the shadow, where the girl is hiding, and finally the girl’s pose, suggesting her aim and her next action.

This is something that makes us clearly imagine what would happen in the near future.

Represent the moment after the climax

We can tell about a moment that happened in the past, also far from the present, by putting some elements that act as a “trace” of it. A classic example can be an ancient ruin, or an abandoned and destroyed village.

In this piece the wreckage of the planes tells us about the previous impact, and the details of vegetation grown over those planes is a clear sign that the climax (a storm maybe?) did not happen recently. This is the moment when the soldiers are inspecting the area, probably searching for something or someone.

We saw that essentially a lot of things can be part of the storytelling of a single painting. We can consider them all as hints. A book can be simply one of many books in the library, or a particular one with strange symbols, a dusty one, or a tattered one. Single objects and their qualities give us hints, as well as colors, contrasts, illumination… even your artwork title! With practice, organizing them in your pieces will be always simpler.

But most important of all, try to immerse yourself in your story! Imagine you are right there, in that place, at that moment, hearing sounds, smells, having feelings under the influence of the context and of the event, imagine a music that fits that scene like in a movie… Participate actively in your story!

All the artworks in this article are by Luca Pisanu. 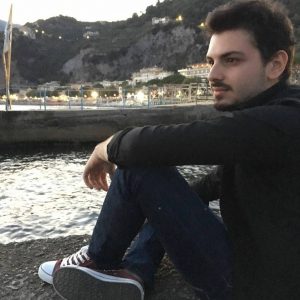 Raffaele is a 22 year old student of product design, interior design and visual communication from Caserta, near Naples, Italy. Having drawing since childhood, Raffaele discovered his passion for illustration and concept art in his early 20s. He started as a self-taught artist with Evenant’s tutorials, and now wishes to share the knowledge he has learned over the years.
 5/5