Concept artist David Villegas is the latest to join our ranks as an Evenant Design contributor, and we’re thrilled to present his two-part character design tutorial on his unique setting for Beyond Human. Here, you will learn how to actively use a story’s narrative and setting to influence how your characters will look and feel. From concept to sketch, to color selection and final touches, David takes you through his in-depth process behind his awesomely epic characters. We hope you find this inspiring and useful, so let’s dive right into Part 2: Chimeras.

I was thinking of something opposite of the cyborg heroes that are embracing technology to enhance themselves. My initial ideas were to do something organic like maybe zombies, animals, or plants. To stick to the theme beyond human, I thought there still should be a human element to start from. Maybe these villains mutated themselves to mix with animal DNA as enhancements. Thus, I called them Chimeras.

Unlike in the cyborgs where I was more abstract about the descriptions, here I focused more on specific animal types and possible weapons.

I want the chimeras to be humanoids. Even if they are already mutants with animal features, it is important that they still stand upright and have proportions similar to humans. I write down some design pegs that I thought of.

I initially wanted a more chaotic colors scheme like they never coordinated anything but I felt like it would still look better if they had a unified color. I imagine their skin would be multi-colored depending on what animal genes they got. Then since this was a group of rebels working together, it seemed to work out that they also had matching colored armor. Red seemed fitting for villains so I went with it. Just like the cyborgs, I added glowing highlights to them to make it more sci-fi.

To unify the shapes, I chose sharper and curved shapes to make it look a bit more organic like having an insect feel.

While sketching, I use the round brush and eraser tool back and forth so I am quickly able to iterate on the shapes.

My coloring process is like starting when everything is dark then turning on the lights one at a time. I believe Goro Fujita uses this process for his paintings. This is a very versatile process for any types of lighting but it is a bit tricky to choose the proper highlight colors.

A new cheat/technique I used here is by painting on the mask of a curves layer that brightens up colors. You can also use a linear dodge layer on top to light up the highlights.

Take it one step at a time. Focus first on the main light and make sure there is enough ambient light on the shadowed areas to keep their forms. Final touches include adding the bounce light and light glows using a linear dodge layer.

The process for rendering is the same as the color sketch. The only difference is I need to redo everything and establish cleaner masks per materials to make coloring easier.

You can make the masks colorful to see the forms better.

I reused the colors from the color sketch here. To be able to work faster, I merged the layers along with the seam lines and details. I did not mask each color unlike with the Sentinels because I was rushing to finish the characters. This enabled me to do quick liquefy adjustments to fix shapes since I was only working on one layer.

I continued to render the character while making sure I keep the lighting consistent. Make sure you look at real references in doing things like clothing folds, rubber tubes, hair, etc.

I felt like the red I painted felt too neutral so I increased its intensity. I also added scratches to the armor to make it look worn out. The neon green greens are added next. Finally, to keep the rendering consistent with the Sentinels I added the final foggy glow effects again but this time it is color red.

This is the final line up. The character feels really different from each other but their colors unified them as a team.

The story is set in the distant future where almost 2/3rds of the earth is now a wasteland while the rest has been converted into a massive barriered utopia built by the richest and most powerful that is protected by the Sentinels.

Based on this, I imagine the Chimeras are a bunch of villains that have learned to adapt and thrive in the wastes. Each of them have a distinct strength that overcomes an aspect of the wasteland. In fact, I decided to make the story to the point where they have already stolen technology from the Sentinels. This explains why they also have power suits now that enables them to fight equally with the extremely powerful Sentinels.

I named them after demons this time. I guess it fitted their red color scheme as well.

These mutated beings were the work of the exiled members of humanity who believe that the next step in evolution is not just through cyber enhancements but also through forced biological mutations. These beings have adapted to live in underground caves where they have experimented on each other to mutate and evolve to survive the highly toxic atmosphere. They call themselves the Chimeras having mixed their DNAs with various life forms they collected which once roamed the earth. These mutations gave them increased senses and strength. However, their source of energy is limited and extremely difficult to produce due to the difficult terrain and extreme weather on the surface. This forces the Chimeras to constantly attack the city of Corinth and steal whatever energy sources and technology they can to survive and to someday create their own utopia.

It was really fun to create the images first and then let it inspire my writing next. I don’t think there should be a fixed process to create characters. What matters is you have fun and keep creating!

That’s it! I hope you learned something from this one.

Until next time,
David 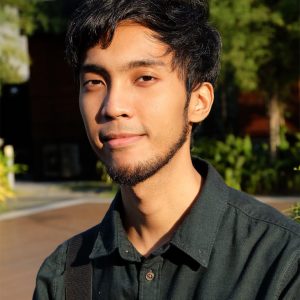 David Villegas, or better known as his alias Deiv Calviz, is a freelance digital concept artist based in the Philippines. Deiv’s expertise includes hyper-realistic and stylized illustrations. Initially studied Multimedia Arts with a focus on Graphic Design, he decided to take illustration seriously after getting second place in a contest by Blizzard Entertainment. His career started at a local outsourcing studio catering to big projects such as The Last of Us, Uncharted 4, Sims 4, Dance Central 3, and Fifa Street. Now a full-time freelancer along with his girlfriend and finicky stray cats, he eventually plans to create his own worlds and stories and is welcoming any new opportunities to grow as an artist.
 5/5